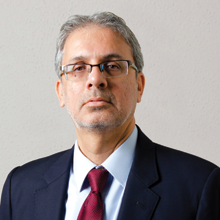 Mr. Mohammed holds an MBA degree in Finance from the Institute of Business Administration Karachi. He is also a Chartered Financial Analyst.